Identity is about more than documents 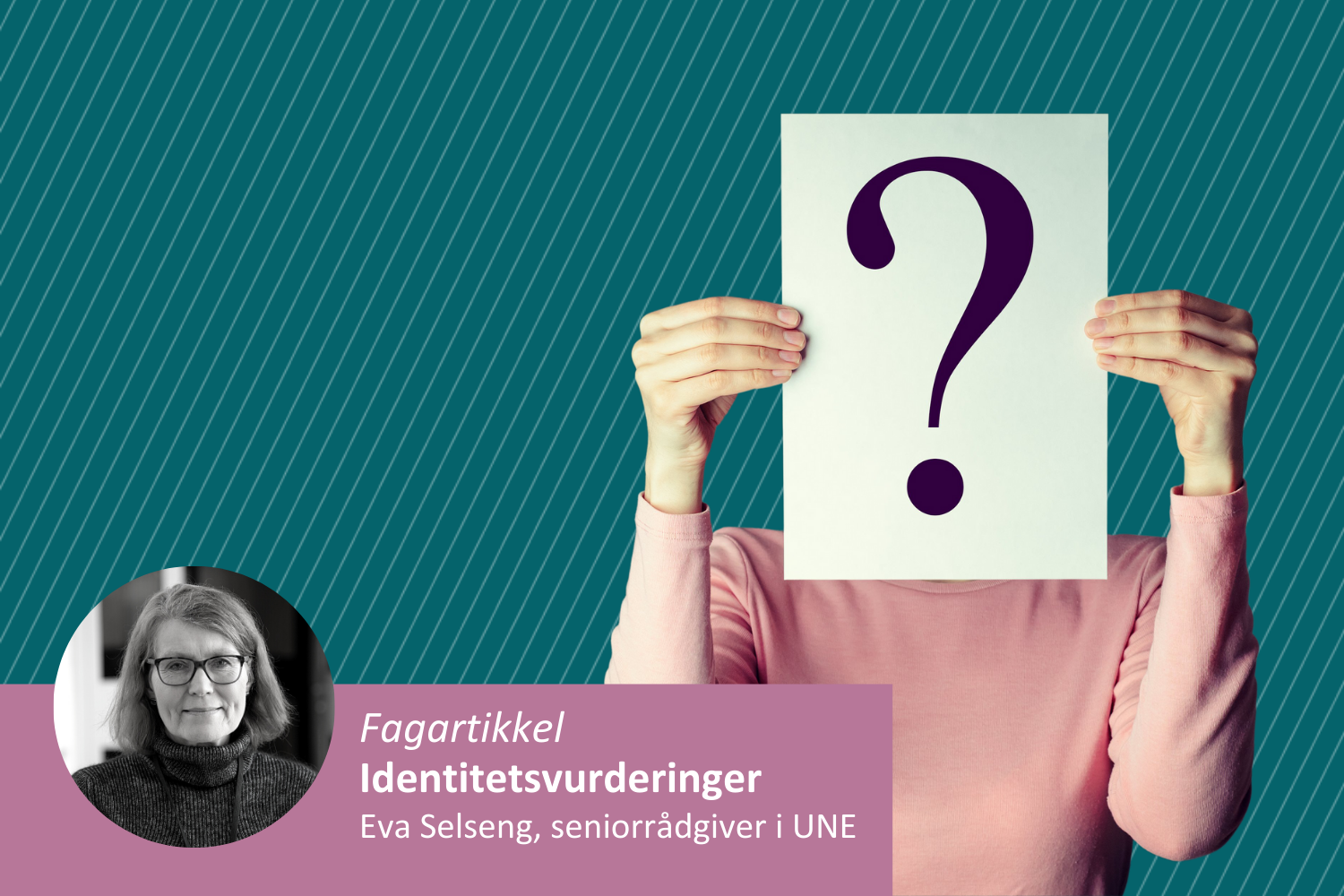 Doubts or incorrect information about identity can result in rejection or a decision to revoke a permit. What are the assessments behind this?

Identity has become one of the most important topics in the immigration administration over the past ten years. Applicants also notice this. They are asked to submit identity documents and take age tests, language tests and DNA tests, and they are asked questions about their background, residence history and family relationships.
Identity has also been a topic in several high-profile individual cases and portfolios in recent years. Questions have been raised about the use of age testing in cases concerning unaccompanied minor asylum seekers. The media have also reported on the situation of adults who gave incorrect information about their citizenship when they arrived in Norway and have later had their permits revoked. Public debate has focused on how this has affected their children in particular.

A correct result depends on a correct identity

Identity assessments are primarily important because a correct result depends on a correct identity. In asylum cases, for example, the UDI and UNE cannot arrive at the correct result if they do not know which country and place an asylum seeker is from. If an applicant gives incorrect information or withholds information about his or her citizenship, the applicant could end up being granted a permit that he or she should never have had. In family immigration cases, the outcome of a case will also depend on the applicant actually having the relationship with the family member in Norway that he or she claims to have, whether as a spouse, fiancé(e), child or parent.
Identity assessments are also important because some types of permit can form the basis for travel documents. For example, refugees are entitled to be issued a travel document if they have substantiated their identity. And those who meet the conditions for Norwegian citizenship, will be issued a Norwegian passport. According to the preparatory works to the Norwegian Passport Act, the purpose of a passport is primarily to allow other states to verify the identity of foreign nationals. So when the Norwegian authorities issue travel documents and Norwegian passports, they are vouching for the identity of the persons concerned.

Another important reason why the UDI and UNE always assess a person's identity before granting a permit is that the authorities need to know who people staying in Norway are and where they are from. False identities can be used to commit serious crimes, and the immigration authorities play an important role in ensuring that this does not happen.
People cannot choose whether or not to provide correct information about their own identity when applying for a residence permit in Norway. On the contrary, the applicant is obliged to ‘assist in clarifying his or her identity’, in the words of the Immigration Act (lovdata.no). The law states that providing incorrect information about who you are when you apply for a residence permit in Norway is such a serious matter that you risk losing your permit.

You can find information about the revocation of residence permits at une.no.

It is useful for the purpose of UNE’s assessments to distinguish between a person's formal identity and his or her sociocultural identity. They are both part of the concept of identity.

Information such as people's name, date of birth, nationality/citizenship and sex makes up what is called their formal identity. Passports and other identity documents usually contain this information. An important part of assessing someone's formal identity is deciding whether the information in the passport can be trusted. In such cases, we talk about a passport having low or high notoriety. A passport's notoriety depends on the procedures each country has in place for registering identity information and issuing passports, and on how widespread corruption is. For people from countries that issue passports with high notoriety, the formal identity will be the most important, and usually decisive, factor.

For persons who come from countries where a passport alone is not enough to prove their identity, the applicant's sociocultural identity will be very important to UNE's and UDI's identity assessments.

Sociocultural identity consists of information about things such as family relationships (clan), upbringing, language skills, education, work and financial situation, membership of a social group, local community, relationships to public and private institutions, ethnicity and political and religious affiliation. All these factors say something about who a person is, even if the information is not recorded in a passport or other documents. By sharing such information with the UDI and UNE, applicants can substantiate their sociocultural identity.

How UDI and UNE assess identity

In all cases where a residence permit is granted, the UDI and UNE must first determine whether the identity of the person in question has been substantiated or not.

This means that the applicant's information about his or her identity is probably correct. The applicant is deemed to have clarified his or her identity. Applicants can substantiate their identity by submitting documentation (formal identity), making a credible statement about their (sociocultural) identity, or through a combination of identity documents and statements. It is often important which country the applicant comes from. If an applicant comes from a country that issues identity documents with low notoriety, then the applicant’s statement about his or her own sociocultural identity will be a very important factor in the identity assessment. For applicants from countries that issue passports with high notoriety, the formal identity will usually be decisive. In all cases except asylum cases, applicants are required to submit a valid passport or other documents from their home country to document their (formal) identity.

You can find more information about identity assessments in our professional guide prepared for case officers and decision-makers in UNE.

When we are unsure about an applicant's identity

In some cases, the UDI and UNE are not sure about the applicant’s true identity. What happens then? In many cases, the application will be rejected. The regulations clearly state that, in principle, an applicant’s identity must be clarified before a permit is granted. This applies to all types of cases.

In cases concerning residence on humanitarian grounds, applicants usually have to submit documentation of their identity. Exceptions can be made in cases where the applicant has substantiated his or her identity in other ways and it is not possible for the applicant to obtain a passport with high notoriety. In very exceptional cases, the regulations allow for permits to be granted despite there being doubts about the applicant’s identity. This requires the humanitarian grounds to be especially strong, for example grounds relating to children or health-related reasons. In order to motivate the applicant to submit identity documents, what are known as limited permits will be granted in such cases. A limited permit does not give the holder the same rights as an ordinary permit, and it does not entitle people to family migration or a permanent residence permit. If the applicant submits identity documents at a later time, he or she will be granted an ordinary permit on humanitarian grounds with no such limitations.

Identity will remain an important topic for the immigration administration in the time ahead. Biometrics is a key word in this context. Biometrics are measurable physical characteristics that are unique to a person, such as fingerprints or a person's face. In April 2021, the immigration authorities began to store biometric data in the form of facial photos and fingerprints when citizens of countries outside the EU and EEA apply for a residence permit in Norway. The purpose of this is to ensure better ID control of persons who apply for residence in Norway and to make it more difficult for people to use more than one identity.

Biometrics can only be used to tell us something about someone's identity after the person entered Norway, however. They do not tell us much about the person's identity in their home country, which is the very foundation on which UDI's and UNE’s decisions are based. Whether it is a question of citizenship, family relationships, religious affiliation or other information, identity can be crucial in determining whether an applicant is granted a residence permit in Norway or not.

Other resources relating to identity and identity assessments

You can find a number of resources relating to identity and identity assessment on the NID website. The Norwegian ID Centre (NID) is an expert body, independent in professional matters, whose function is to ensure that the ID work carried out by the police, immigration administration and other public bodies is of high quality.

A Court of Appeal judgment from 2020 (lovdata.no) describes asylum seekers' duty to assist in clarifying their identity and the extent of this duty.