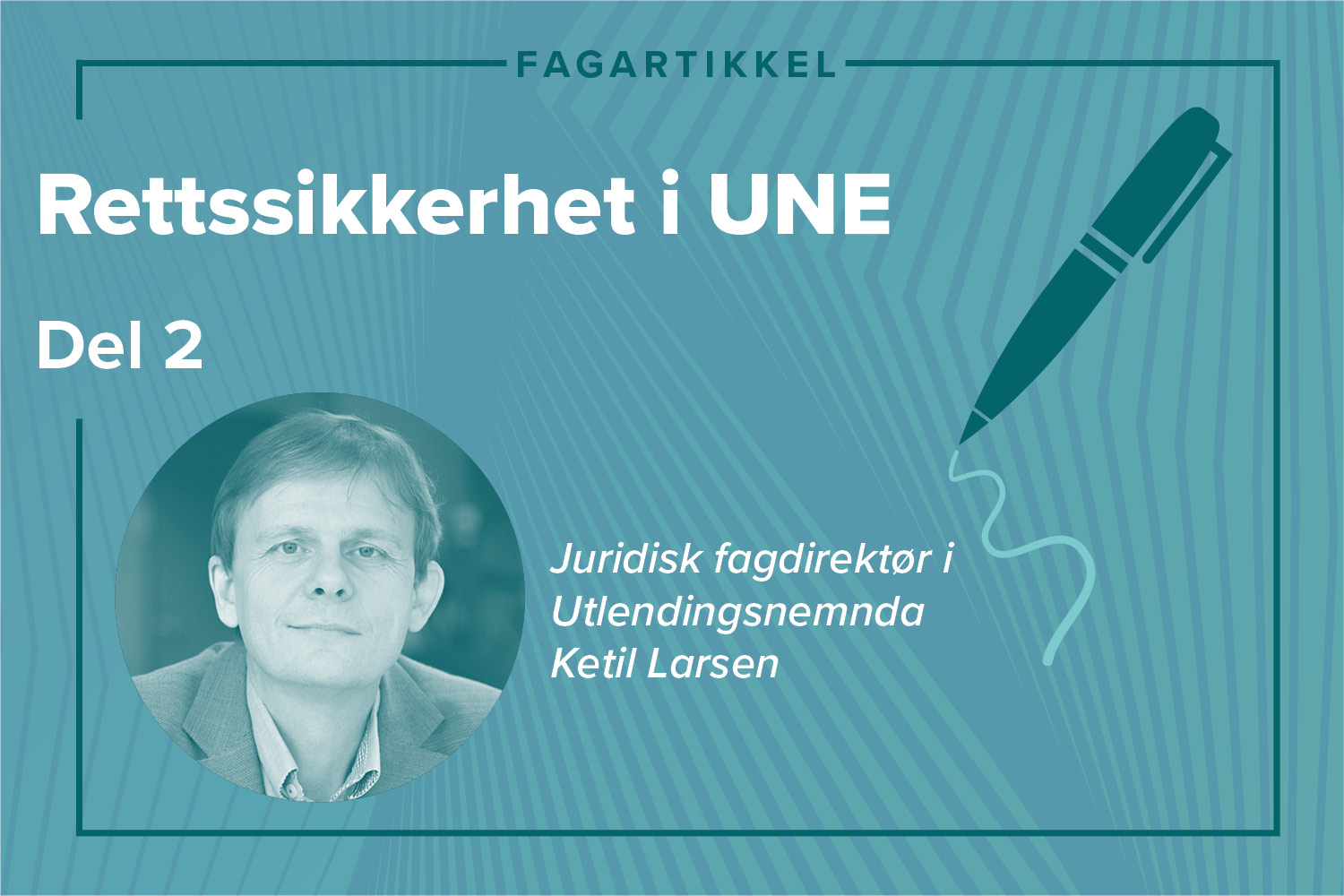 Since its establishment in 2001, UNE has made almost 120,000 asylum decisions. In a small number of cases each year, an appellant or his or her spokesperson informs us that things have gone wrong after the return. What does UNE do in such cases and why?

This is the second of two articles about due process in asylum cases and the Immigration Appeals Board’s (UNE) role as an appeal body. This article is about claims concerning return to persecution.

See Part 1 on due process in general in asylum cases.

1. What UNE is allowed to communicate

When UNE is asked to comment on allegations of procedural errors or claims that a former asylum seeker has been persecuted upon returning to his or her country of origin, there are normally restrictions as to what we can say. This may be due to the following:

2. The party and UNE both have a duty to elucidate the case

Pursuant to Section 17 of the Public Administration Act, the administrative body has a duty to clarify the case as thoroughly as possible. In reality, the requirement applies equally to UNE and the asylum seeker. A person applying for a permit, in this case an asylum seeker, is obliged to disclose every fact that may have a bearing on the application and to present all documentation available to him or her.

To be entitled to protection (asylum), the asylum seeker must have a need for protection for a certain period of time ahead. If the grounds for asylum are substantiated with reasonable probability (which is normally the standard of proof in asylum cases), UNE must make an assessment of the risk of persecution if the asylum seeker returns to his or her country of origin. Making assessments about what can happen in the future will often entail a degree of uncertainty. UNE must consider both the facts and the possibility of future persecution based on the information available to us at the time the decision is made.

When considering a decision in arrears, the question will be whether the case processing was satisfactory and the decision appropriate at the time the decision was made. If UNE did not have all relevant information at the time the decision was made, the reason can be that UNE had not elucidated the case sufficiently, that the asylum seeker withheld information or that information has become known that was not available to either UNE or the applicant at the time of the decision (e.g. a secret wanted notice in the applicant’s country of origin). UNE’s responsibility is to prepare the case sufficiently well and to follow the rules of procedure set out in the Public Administration Act and other provisions of law, cf. the article on due process – Part 1.

‘Error’ can mean a lot of things. A decision can be poorly justified and thereby be flawed even though the conclusion is correct. If the justification is insufficient or the case insufficiently prepared, these are specific errors that can be corrected by processing the case again and making a new decision. Such errors can normally be avoided by having sound procedures and expert support during the processing of the case, and by learning from the judgments we receive.

A possible source of error is that people can assess information in different ways. Assessments of credibility or a future risk of persecution are made by people and will never be a matter of exact science. Asylum cases may entail a number of uncertainty factors. Often, there is lack of evidence of who the asylum seeker is and his or her grounds for asylum. The documents presented are not necessarily authentic, and oral depositions are not always easy to evaluate. It may be demanding to carry out investigations in the applicant’s country of origin. Sometimes, the country information may also be of uncertain quality. We may be dealing with contradictory or unclear evidence. UNE must nonetheless make decisions also in these cases, and the applicant should not have to wait for many months for an answer. The solution can be to give the applicant the benefit of the doubt, but even with our wide margin of doubt, we cannot guarantee that UNE will never make mistakes.

When the decision-makers at UNE make individual assessments of the evidence and risks in each case, similar cases may have different outcomes. This may be due to the fact that each case is considered individually, in which case the outcome will not be a breach of the principle of equal treatment.

However, our aim is that it shall not matter who is involved in the processing of a case. At UNE, information about the country and about regulations and practices is extensively shared. We also have internal guidelines and arenas for exchange. At UNE, all cases are prepared by teams of case officers who all work on the same types of cases, a practice that fosters equal treatment of similar cases.

The human factor may nonetheless play a role – be it the asylum seeker making a statement, the interpreter translating, the lawyer assisting, the case officer preparing the case or the decision-makers making the decision. It is hardly possible to create a case processing system that ensures that no errors are made or where the decision-makers always come to the same conclusion in questions of doubt.

Errors can happen, no matter how thorough the case processing may be. We take all claims that a person has been returned to persecution seriously. We will often conduct an internal review of the case processing and carry out investigations through Norway’s foreign service or ask for more information from the person who reported the information.

UNE goes through these cases with the aim of identifying errors or points for improvement. We seek to learn so as to eliminate possible weaknesses in our future case processing. UNE also has the possibility of making a new decision that enables the foreign national to return and settle in Norway. That is what happened in the Rwanda case described below.

4. Reports of specific cases of return to persecution

We have not compiled statistics on the number of cases where we have received reports of security incidents after a person has been returned to his or her country of origin. My impression is we receive less than ten such cases on average every year, or even fewer. By comparison, UNE has since its inception in 2001 made more than 100,000 rejection decisions. We cannot say for certain how many have returned to their country of origin, but probably several tens of thousands.

In a few isolated cases, UNE has concluded that the probability of persecution or other serious security incidents has been substantiated, or that it has not been possible to draw a conclusion on the basis of the available information. So far, UNE has concluded in one single case that its decision was incorrect, and that the person should have been granted protection in Norway.

That case concerned the return of a person to Rwanda, where neither UDI, UNE’s board hearing nor Oslo District Court had found in favour of the applicant. After being returned to Rwanda, the person was arrested and convicted of dissident activity. Our internal review and subsequent reversal of the decision show that UNE should have granted the person protection. The outcome turned out wrong due to specific circumstances that led UNE to underestimate the applicant’s need for protection. These circumstances can explain, but not excuse, that we made an incorrect decision.

During the period from 2001 and up until today, UNE is only aware of a few more examples – probably less than ten in total – where we agree that persecution or other serious security incidents have or may have taken place after the person was returned to his or her country of origin. Some of these cases have been the subject of legal actions against UNE’s decision, cf. below.

In recent years, claims of persecution have been put forward in some cases that have made headlines in the media:

In the handful of cases where a former asylum seeker has been the victim of a security incident after returning to his or her country of origin, we have noted a few points for learning or improvement. These points also come from cases where we have not ourselves concluded that our decision was incorrect. They include the importance of:

These points relate to the cases mentioned above. There is no reason to believe that they are an indication of general systemic failure.

5. When UNE is unable to confirm that the applicant will be returned to persecution or that UNE has made an error

Some cases relate to circumstances that UNE could hardly be expected to anticipate at the time the decision was made. In asylum cases, security incidents may occur after the person was returned even if the case processing respected the principle of due process and the decision was correct at the time it was made. When things nonetheless go wrong, this may be due to external factors that the UDI and UNE were unable to anticipate. One example would be an unpredicted change of regime or the outbreak of war in the asylum seeker’s country of origin.

In other cases, the applicant may for example have withheld information in the asylum application, or challenged the authorities of his or her country after returning there, without UNE having had reason to believe that this would happen. The applicant may also have been the victim of an incident independent of the asylum application, such as an accident, a crime or an act of terror. Some foreign nationals may also experience humanitarian challenges upon their return, without these problems amounting to persecution.

Sometimes, ‘something’ happens upon the applicant’s return that cannot be characterised as persecution. We have seen several examples of persons being withheld for a couple of days at immigration control and then released without any further problems. It is not uncommon for countries to practise strict immigration control of persons returning with no identity documents. Incidents like these do not, in principle, constitute persecution under the Refugee Convention.

Furthermore, there is a difference between error and disagreement. Claims concerning return to persecution or that UNE has made an error may arise from disagreement with the decision. It does not necessarily mean that the person has been the victim of abuse.

There is also a difference between a claim and documentation. In several cases where UNE has received reports claiming that someone has been returned to persecution, this information has turned out to be of no value or impossible to confirm or substantiate. In some cases, there is no substantiation at all to support such claims.