Equal treatment and change of practice 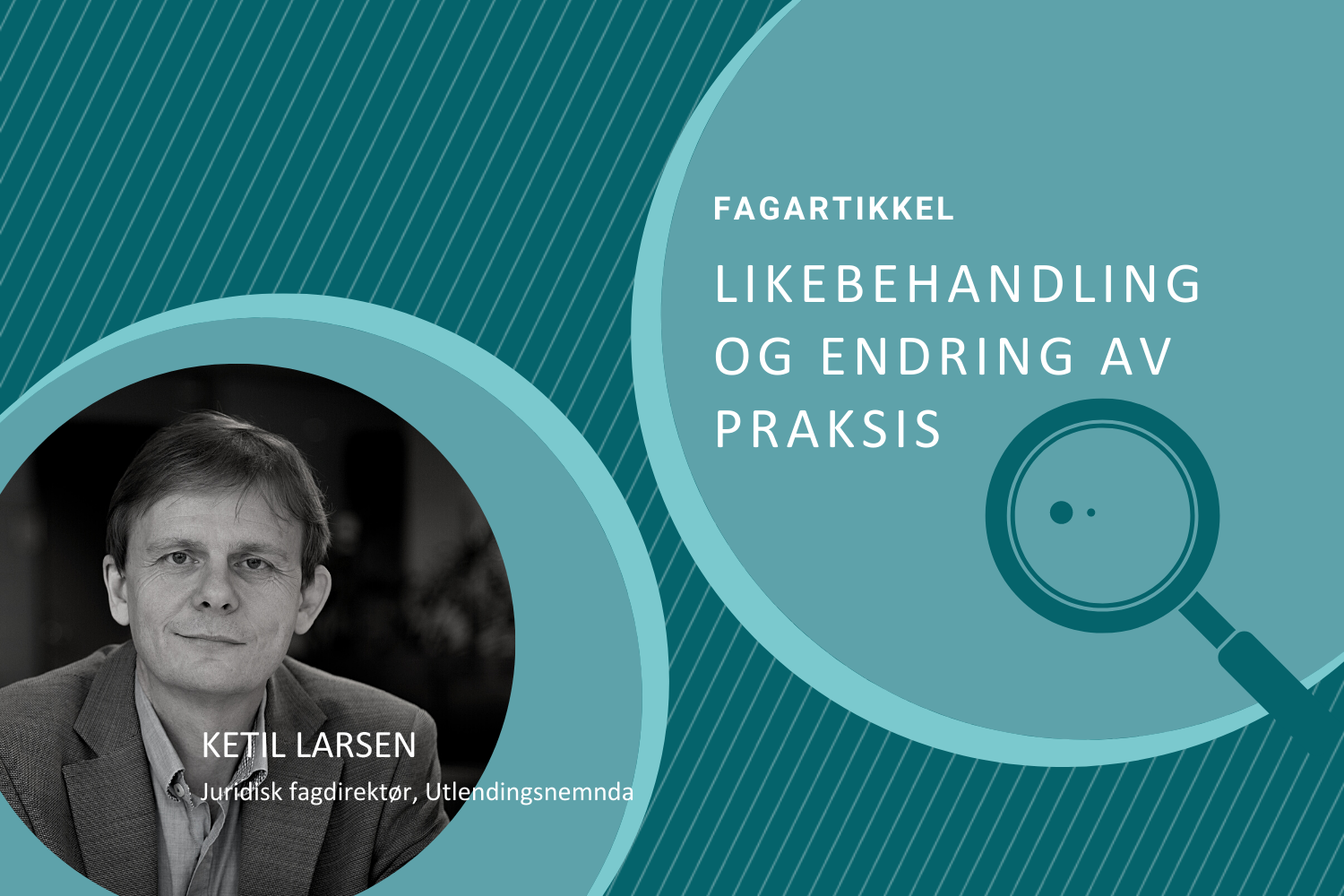 It is an important legal principle that similar cases should have the same outcome. In the appeals board system, there are nonetheless legitimate reasons why cases with many similarities sometimes have different outcomes. One reason is a wish to adjust the board’s practice.

Equal treatment is an important legal principle. And while similar cases should have the same outcome, the UDI and UNE may nonetheless develop or change their practice. When are cases similar enough to indicate the same outcome, what differences can justify different outcomes, and what does it take to change practice?

Both the UDI and UNE make a concrete assessment of each individual case. What implications does it have for equal treatment and the establishing of practice that UNE is a board, comprising individual decision-makers (board chairs and members)?

Case processing is not an exact science

Judicial case processing is not an exact science. Legal texts can be ambiguous, and the words used can have a slightly different meaning in the legal context than in everyday speech. The preparatory works, meaning the assessments made by a legal committee, the Government or the Storting when an act of law was being prepared, can give an indication of how we should interpret that act. The same applies to decisions by the courts, statements by the Parliamentary Ombudsman and established administrative practice – meaning previous decisions made by the UDI and UNE in immigration and citizenship cases. Also the Norwegian Constitution and international conventions such as the Refugee Convention, the European Convention on Human Rights and the Convention on the Rights of the Child have a bearing on the currently applicable legislation in Norway.

Political or other types of pressure to arrive at a different result than warranted by the application of the law or information in the case should not impact UNE’s decisions. The Storting and the Government must govern UNE through laws and regulations.

Even if the wording of the law is unambiguous, the outcome of a specific case is not necessarily given. The law can provide for the possibility of discretion, for example that we ‘may’ grant a residence permit, in cases such as when ‘strong humanitarian considerations’ exist (Section 38 of the Immigration Act). Moreover, the law allows for emphasis to be placed on ‘immigration regulatory considerations’ in this assessment. When the wording of the law provides for such discretionary assessments, administrative practice can be of great importance to decisions in new cases. UNE has, for example, developed practice for both the importance of various health information and cases where children have ties to Norway that can constitute strong humanitarian considerations.

In order to be able to determine whether the conditions of the law are met, or to exercise discretion in a case, we need to know the facts of the case. Have the parties entered into a valid marriage? What is the applicant’s identity? Has the applicant been politically active in his or her country of origin or converted to a new religion? In the process of clarifying the applicant’s situation or what has happened, we make an assessment of the evidence. The assessment can be about both the applicant’s credibility and what has been sufficiently substantiated based on the information available in the case and the situation in the applicant’s country of origin. Asylum cases are often characterised by uncertain or insufficient evidence. Normally, the standard of proof in asylum cases is that circumstances that may lead to persecution have been substantiated with ‘reasonable probability’. In other words, the applicant will be given the benefit of the doubt about factual circumstances. In other immigration and citizenship cases, the standard of proof is normally a preponderance of probability or reliable documentation.

Although it is UNE’s goal that the outcome of a case should not depend on who the case officer, board chair or board members are, the human factor can play a part in all the assessments mentioned above.

In the same way as the courts, UNE has independent decision-makers: the board chairs and board members. Our board chairs must meet the same requirements as court judges. Historically, the number of board chairs has varied from 16 to more than 30, while we have a few hundred board members. The latter are appointed for four years at a time by the Ministry of Justice and Public Security (previously by the Government), on the recommendation of the county governors, the Norwegian Association of Lawyers, the Association of Social Scientist and humanitarian organisations.

Most administrative bodies are hierarchical, meaning that they are line organisations with a director general who has overall responsibility for all decisions. In these administrative bodies, the director general can decide the organisation’s practice. UNE’s decision process is not subject to a line organisation, but involves independent decision-makers. That means that no one can review a decision made by a board chair or board. Nor are the different board chairs and boards bound by each other’s decisions.

A board chair or board’s statement about how they interpret the law or how cases should be decided must not necessarily be followed by other board chairs or boards. When several decisions pull in the same direction, the principle of equal treatment could indicate that new cases should have the same outcome. That is why UNE sometimes holds many board hearings to clarify its practice. Once a practice has been established, it may mean that the type of case concerned is no longer associated with material questions of doubt. In such case, new decisions can be made without a board hearing.

At UNE, several board chairs and members contribute to establishing the general practice. Multiple decision-makers and contributions from lay board members mean that the decision-making power is distributed to some extent and that practice builds on a broad foundation. Having many independent decision-makers also means that several parties are involved in reviewing the practice and can help to ensure that it is more well-considered than if one or a few individuals were to decide the practice.

In other words, UNE’s practice is normally established through multiple decisions in a given area. UNE may also decide that a case shall be decided by a Grand Board in cases of fundamental significance, cases with substantial social or economic consequences, and cases in areas where practice tends to vary (Section 16-4 of the Immigration Act). A Grand Board consists of three board chairs and four board members, and is the only form of UNE decision that creates a precedent for other cases. A precedent means that the Grand Board can give an opinion on how the law should be interpreted or other questions of principle that the board chairs and boards will adhere to in subsequent decisions. The Grand Board is an important measure to achieve equal treatment, but is not suitable in all areas. Sometimes, it can be difficult to find a case that the Grand Board can use to clarify a particular issue with a bearing on a number of other cases. The cases can also be so different that we need multiple decisions to cover a broad range of issues within a case type.

Reasons why similar cases can have different outcomes

UNE’s independent decision-makers apply the same legal principles when they make decisions. They will therefore often arrive at the same result in similar cases.

As mentioned above, cases involving material questions of doubt will be decided at a board hearing. Since these cases both involve material questions of doubt and are decided by several independent decision-makers, similar cases may have different outcomes. Firstly, this could be because the cases, in addition to their similarities, also involve differences that constitute objective grounds for different outcomes. Secondly, it can be because different people reason and emphasise different factors differently. This will typically happen before practice in a given area has been established.

Thirdly, a board may wish to change established practice, for example because it disagrees with it. The system is such that a board that would like to see a general adjustment of practice signals this through the decision it makes in the case at hand. However, a board shall not ‘temper justice with mercy’, i.e. show mercy with an individual appellant at the expense of justice, or be more stringent or more lenient than it would be in other similar cases.

The board may also consider that the basis for the present decision is different than for previous cases under the same case type. Among other things, the board can emphasise new information about the country of origin or changes in the sources of law, for example a recent Supreme Court judgment or an opinion by the Parliamentary Ombudsman. In these cases, as in others, there will normally be a need for multiple decisions before we can say anything about changes in UNE’s established practice.

UNE makes active efforts to ensure that its practice promotes equal treatment and to make changes when there are expert grounds for doing so. Among other things, we pay close attention to decisions by the courts, ECtHR case law, opinions by the Parliamentary Ombudsman, new acts and regulations and developments in the applicants’ countries of origin. All UNE’s cases are prepared by a dedicated secretariat, divided into teams working on the same type of cases. This provides a good basis for both equal treatment and individual case processing. We also have arenas for exchange, descriptions and information about practice, internal guidelines, competence-raising measures and other initiatives intended to contribute to high quality in UNE’s case processing. A lot of this material is publicly available at une.no.

Where to find descriptions of UNE’s practice at une.no: